In escapade eight of The Toad Chronicles adventure ride, Zeni shares her tale of meeting the “sugar papa” toad. Purchase this tale and decide if the world of on-line dating is all it’s cracked up to be. 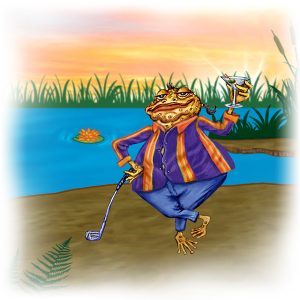 Meet Sergie, the “sugar papa” toad, who Zeni meets on an on-line dating site she joins to conduct some research for her chronicles. After posting a profile on the site and receiving a deluge of e-mails from men all around the world, none of whom capture her interest, Zeni decides to proactively search the members’ profiles when she comes upon Sergie’s profile.

Although Sergie is looking to meet a woman under forty, Zeni decides to e-mail him even though she is forty-two years of age. Seconds later, after sending her e-mail, Zeni has second thoughts and feverishly attempts to delete her e-mail. Thinking she has been successful, she is later surprised when she receives an e-mail from Sergie in reply.

Zeni and Sergie then engage in a hilarious e-mail exchange where each learns some surprising secrets about the other. Once their respective secrets have been exposed, Sergie asks Zeni to dinner. When Sergie arrives to pick her up for their date, though, Zeni is surprised by another secret he has been keeping.

What does Zeni discover when Sergie arrives at her home? Does Sergie grant Zeni a pardon for being over forty, or is she “over the hill” in Sergie’s eyes?

Find out more about Zeni’s escapade with the “sugar papa” toad in chapter nine. Zeni’s adventure into the world of on-line dating will leave you wondering if it is all it’s cracked up to be.

Be the first to review “The Toad Chronicles: the “Sugar Papa” Toad” Cancel reply