In escapade one of The Toad Chronicles adventure ride, Zeni shares her tale of meeting the “religious fanatic” toad. Purchase this tale and discover just how far this toad will go with his criticisms of Zeni. 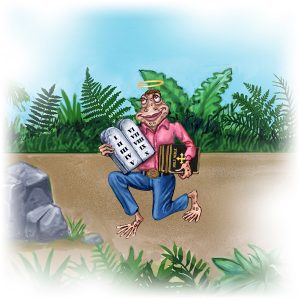 Meet Ralphie, the “religious fanatic” toad, who Zeni meets during her junior year of college when she is home visiting her parents during Christmas break. Somehow, after an enormous amount of pleading on her part, Natalie, Zeni’s older cousin, convinces Zeni to join her at a local nightclub known as being a cesspool of overage lounge lizards. Uncomfortable being at the club, Zeni looks to escape when she sees the Adonis-like Ralphie talking with Natalie.

After courageously strutting across the dance floor, Zeni introduces herself to Ralphie. They strike up a conversation and spend the following week together before Ralphie heads back to Manhattan.

Zeni’s fated meaning with Ralphie at the club eventually takes her to New York City for a weekend to visit him. En-route to the Big Apple, she meets a handsome stranger on the plane. While excited to see Ralphie when she disembarks, she quickly discovers he has undergone a radical personality shift which doesn’t mesh so well with her own personality.

Does Zeni ride out the weekend with Ralphie? Or does she sneak away to meet up with the handsome stranger from the plane?

Find out more about Zeni’s escapade with the “religious fanatic” toad in chapter one. It is sure to keep you laughing one minute and shaking your head in amazement the next, as Zeni struggles to maintain her beliefs in the face of Ralphie’s constant criticisms.

Be the first to review “The Toad Chronicles: the “Religious Fanatic” Toad” Cancel reply