In escapade seven of The Toad Chronicles adventure ride, Zeni shares her tale of meeting the “miserably married snakus” toad. Purchase this tale and prepare to be shocked by this toad’s outlandish behavior. 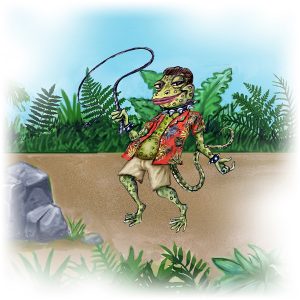 Meet Mikey, the “miserably married snakus” toad, who Zeni meets while vacationing in the Abacos Islands. While Zeni is sitting at a restaurant bar, having dinner and reading a book, Mikey and his brother, Richie, plop down on some nearby barstools.

Mikey strikes up a conversation with Zeni and offers to buy her drink. When Zeni’s tab arrives, Zeni realizes she doesn’t have enough cash or a credit card to cover it. Mikey graciously pays Zeni’s tab with a promise that Zeni will buy him a drink the next time they see each other on the island.

For the next couple of months, Zeni and Mikey e-mail each other, exchanging updates on their respective companies with Mikey closing his e-mails by asking what type of shoes Zeni is wearing. On one occasion, Zeni decides to answer him about her shoes and what Mikey sends in response catches Zeni by surprise. Finally, a few months later, Zeni and Mikey meet again at the restaurant bar.

What happens between Zeni and Mikey the second time they meet? Does Mikey expose himself as being a cross-dresser who loves women’s shoes, or does he have another type of wart that sets off some alarm bells?

Find out more about Zeni’s escapade with the “miserably married snakus” toad in chapter seven. You may find you are more than a little shocked by Mikey’s outlandish behavior.

Be the first to review “The Toad Chronicles: the “Miserably Married Snakus” Toad” Cancel reply