The Toad Chronicles: the “Lost at Sea” Toad

In escapade ten of The Toad Chronicles adventure ride, Zeni shares her tale of meeting the “lost at sea” toad. Purchase this tale and get ready to duck and take cover when this toad suddenly reveals a different side to his personality. 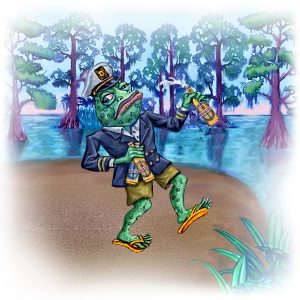 Meet Louie, the “lost at sea” toad, who Zeni meets one evening at a marina bar in the Abaco Islands. While Zeni is waiting for the band to begin playing, Jefferson, one of the locals, walks up to her table and introduces her to Louie.

Louie, who is a captain aboard one of the yachts docked at the marina, has been coming to the island for years and loves it as much Zeni. The two of them instantly hit things off and end up going to lunch together the following day.

During lunch, Zeni learns that Louie is recently divorced and has lost custody of his children. He tells Zeni that he hopes to find stability in his life by settling down on terra firma versus continuing to work as a sea captain. Enjoying Louie’s company, Zeni spends the next three days with him, writing her book aboard the yacht while he works, then heading out for afternoon drinks, dinner, and some late-night dancing.

Has Zeni finally found the Prince Charming of her fairy tale? Do she and Louie end up settling down into a life filled with adopted children and rescue dogs where their weekends are spent mowing the grass, cleaning the pool, and doing home renovations?

Find out more about Zeni’s escapade with the “lost at sea” toad in chapter eleven. Get ready to run and take cover when you see what happens near the end of this escapade.

Be the first to review “The Toad Chronicles: the “Lost at Sea” Toad” Cancel reply