In escapade three of The Toad Chronicles adventure ride, Zeni shares her tale of meeting the “perverted priest” toad. Purchase this tale and discover if priestly vows of celibacy are truly honored or simply ignored. 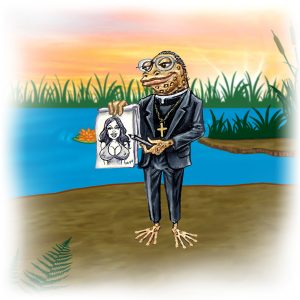 Meet Father Paulie, the “perverted priest” toad, who Zeni meets one afternoon at an outdoor wedding reception she agrees to attend with Archie, a lifelong friend of her. After arriving at an old hotel on the beach, Archie heads off to see some of his friends while Zeni makes her way toward the bar. About midway to the bar, Father Paulie stops Zeni in her tracks, wanting to draw a portrait of her as a gift for the bride and groom.

After initially declining Father Paulie’s request, Zeni reluctantly agrees to have her portrait drawn during which time she endures not only the sweltering summer heat, but some out of character behavior from a priest. Father Paulie finally finishes the portrait, but Zeni rushes off to find Archie without seeing the finished product. While Archie wants to give Father Paulie a piece of his mind for his inappropriate behavior, Zeni begs him to let it go as she wants the whole ordeal to simply end.

Is there more to come between Father Paulie and Zeni? What happens to Archie, who adores Zeni and wants to be her knight in shining armor?

Find out more about Zeni’s escapade with the “perverted priest” toad in chapter three. Zeni’s adventure with Father Paulie will definitely leave you wondering if priestly vows of celibacy are truly honored or simply ignored.

Be the first to review “The Toad Chronicles: the “Perverted Priest” Toad” Cancel reply