In escapade eleven of The Toad Chronicles adventure ride, Zeni shares her tale of meeting the “double dater” toad. Purchase this tale and learn just how far this toad will take his love for two-one-specials. 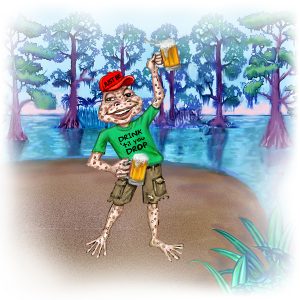 During escapade eleven of The Toad Chronicles adventure ride, Zeni meets Dicky, the “double dater” toad, in one of her political science classes she is attending her junior year of college. As Zeni reaches down to pick her pen up off the floor, Dicky bends down at the same time to assist her at which time they literally bump heads.

After class ends, Dicky formerly introduces himself and invites Zeni to join him for happy hour at one of the local pubs. Eager to meet some students from her class, Zeni joins Dicky, resulting in the two of them striking up a friendship for the remainder of the semester.

While Zeni and Dicky graduate a semester apart and both attend law schools at different schools, circumstances eventually bring them back together again when Zeni decides to transfer to the law school Dicky is attending. When they see other again, they instantly rekindle their friendship, spending their free time together studying for their law school classes, attending the at-home footballs games, and indulging Dicky’s love for two-one-specials at one of the local pubs. Eventually, their friendship blossoms into a relationship as boyfriend and girlfriend, until one weekend when that relationship takes a sudden and unexpected turn.

What’s happens between Zeni and Dicky that weekend? Do they get engaged, return to being just friends, or part ways altogether?

Find out more about Zeni’s escapade with Dicky in chapter twelve of The Toad Chronicles adventure ride. Learn just how far the “double dater” toad will take his love for two-one-specials.

Be the first to review “The Toad Chronicles: the “Double Dater” Toad” Cancel reply