In escapade four of The Toad Chronicles adventure ride, Zeni shares her tale of meeting the “boom boom boomerang” toad. Purchase this tale and learn about the hilarious matchmaking efforts of Zeni’s dear ol’ Aunt Luna. 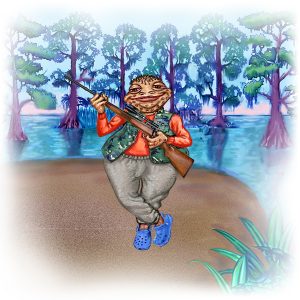 Meet Bobby, the “boom boom boomerang” toad, introduced to Zeni by her very nosey and extremely imposing, Aunt Luna, who is convinced she is going to lead Zeni to the Promised Land of Matrimony. After all, Zeni is over forty and has never been married, a plight akin to death, according to her Aunt Luna.

While Zeni is apprehensive about meeting Bobby, Aunt Luna insists her matchmaking skills have found the perfect Prince Charming. Forging ahead with her plans, Aunt Luna finagles a meeting between Bobby and Zeni one afternoon, hoping Bobby will be hooked, once he lays eyes upon Zeni. Aunt Luna is over the moon when Bobby admits after the meeting that he is interested in dating Zeni.

For weeks on end, Aunt Luna repeatedly hounds Zeni with reports about Bobby and his efforts to ask Zeni out on a date. Finally, one afternoon, Bobby shows up at Zeni’s office bearing a rather unique gift draped over this right shoulder.

Does Bobby ask Zeni out on a date that afternoon at her office? Is Aunt Luna successful with her matchmaking efforts, resulting in Zeni finally reaching the Promised Land of Matrimony?

Find out more about Zeni’s escapade with the “boom boom boomerang” toad in chapter four. Zeni’s hilarious exchanges with her Aunt Luna are guaranteed to leave you in stitches.

Be the first to review “The Toad Chronicles: the “Boom Boom Boomerang” Toad” Cancel reply