In escapade nine of The Toad Chronicles adventure ride, Zeni shares her tale of meeting the “arranged marriage” toad. Purchase this tale and learn about this toad’s antiquated views of women, marriage, and commitment. 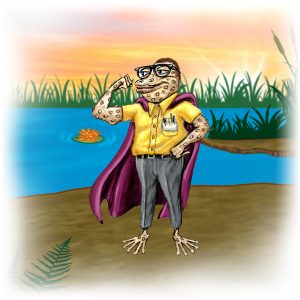 Meet Artie, the “arranged marriage” toad, who Zeni is introduced to by Jimmy Spinozzi, a dear friend of her father’s. Zeni runs into Mr. Spinozzi one afternoon at which time he enquires about her personal life. Worried that Zeni is still single and going to get old without having children to care for her, Mr. Spinozzi decides to don his matchmaking hat and introduce her to Artie, a nice Italian boy according to Mr. Spinozzi’s description.

A few days later, Artie calls Zeni and introduces himself. After totally monopolizing the conversation, Artie asks Zeni out to dinner. Trying to remain optimistic that Mr. Spinozzi might find a second career as a matchmaker, Zeni agrees to have dinner with Artie.

Artie arrives at Zeni’s home promptly Friday evening, looking like the ultra-conservative Clark Kent compared with Zeni who is vamped up like the very sassy and somewhat saucy Lois Lane. They head to a beautiful bistro on the beach where Artie finally asks Zeni to tell him about her life, family, and interests.

What happens between Zeni and Artie during dinner that night? Does Mr. Spinozzi successfully orchestrate a match made in Heaven, or are Zeni and Artie more like oil and water that just do not mix well.

Find out more about Zeni’s escapade with the “arranged marriage” toad in escapade ten. Get ready to watch as Artie sticks his foot into his mouth on more than occasion.

Be the first to review “The Toad Chronicles: the “Arranged Marriage” Toad” Cancel reply