The Toad Chronicles: the “Abducted by Aliens” Toad

In escapade two of The Toad Chronicles adventure ride, Zeni shares her tale of meeting the “abducted by aliens” toad. Purchase this tale and discover whether life on other planets really does exist. 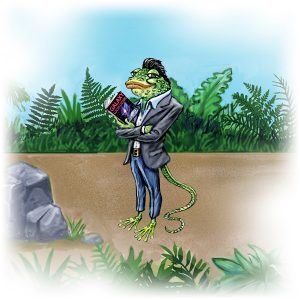 Meet Alfie, the “abducted by aliens” toad, who Zeni is introduced to by Harvey, her hairstylist of the past five years. At almost every hair appointment, Harvey grills Zeni about her latest escapades in the swamps as he is well aware of her quest to find Prince Charming. On one occasion, though, Harvey is unusually perplexed by Zeni’s plight and suddenly thinks of his friend, Alfie, a charismatic, international jet setter, as a potential candidate for Prince Charming.

A few months later, fate intervenes, and Zeni meets Alfie at Harvey’s salon while he is there getting his hair cut. Alfie asks for Zeni’s number and calls her to make plans for dinner later that week.

When Alfie arrives to pick her up for their date, Zeni finds she is highly aroused by his handsome, chiseled physique. She grabs her handbag off the kitchen table and heads off to dinner with Alfie, smiling at the thought of the wonderful evening ahead.

What happens to Zeni and Alfie during dinner? Has Zeni finally met Prince Charming, or are Alfie’s warts and imperfections a little more than what Zeni might bargain for?

Find out more about Zeni’s escapade with the “abducted by aliens” toad in chapter three. Zeni’s night out with Alfie will not only shock you, but have you contemplating whether life on other planets really does exist.

Be the first to review “The Toad Chronicles: the “Abducted by Aliens” Toad” Cancel reply